Ever since Apple has release iPhone 5s(Gold edition), golden smartphone becomes popular. Recently, some Samsung information news unveiled that Samsung Company will release two more edition of Samsung Galaxy Note 3 in red and in rose gold.
Samsung now has three colors for Note 3, white, black and pink. They decide to sell rose gold and red condition so as to catch fashion young customers’ eye. It is said that the red one will be sold late in this month and the rose gold one will be two weeks latter than the red one. 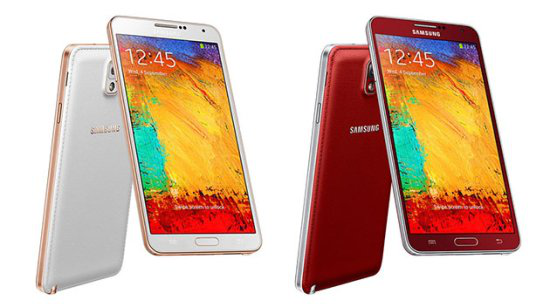 According to the pictures exposed, the design of the phone looks fashion. Apart from the rose gold of the phone body, the crust of the phone which is made of leather is in white color. The design of it is quite similar to that of Chanel. For the red edition, it uses red for the phone body and the silver color for the frame. The red and the rose gold edition of Samsung Galaxy Note 3 will be sold all over the world. It has a high possibility that the carriers of some regions can get a priority to sell them in advance.
Although the new editions are predicted to start selling near January, the authority news of the exact release time has not come out yet. Once we have the latest new, we will tell you about that. So, if you are interested in the selling time, you can pay close attention to us.